Samsung has over the years developed to become a reputable name in the electronic industry. They are very popular around the world for their roles in the development and product of mobile phones, televisions, air conditioners, and other electronics. Samsung is one of the electronics producing companies whose role is not limited to just copying and mass-producing already invented electronic technologies, but they are also at the forefront in technological research and developments for the production of such electronics. For instance, Samsung was the company that released the first-ever mobile phone with LTE technology in the world in the year 2010. They have also been innovative in their television production. Their very first product after they were established in 1969 was black and white televisions. Since then, they have not only improved in their television production but have launched many new types of television including state of the art televisions. Their latest type of newly developed television productions is The Wall televisions. You can find out more about Samsung from the link. Some information about The Wall Samsung Televisions would be discussed subsequently. 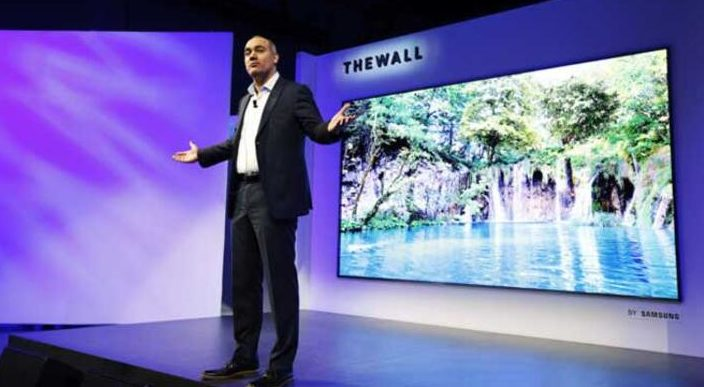 The size of the television gives Samsung’s The Wall television a sort of versatile functionality. First is the fact that for those who have luxury homes and mansions, they could easily install the television in their rooms and be able to enjoy entertainment even much more than they would with other types of smaller television. However, beyond that, it could easily serve if you want to have a cinema in your home or even launch a public cinema. The quality of pictures from the television would be better than what you would get from projectors and other means of projecting motion pictures in cinema halls, while still enjoying the same size if not a bigger size. If well protected from weather elements, especially rain, it could also serve as a billboard for advertisement. It could also be used for outdoor events where projection or film shows are involved. It could also come in handy during conferences and other large meetings where slides or meeting notes are to be projected on a screen. Thus, Samsung’s The Wall television can be used for a wide range of purposes or anywhere there is the need for a big display to show things from television programs, movies, to projecting of slides and other information.

Picture quality is very important in everything we look at, be it natural or on screen. The Wall Television from Samsung comes with superior picture quality, thereby delivering pure colors to viewers compared to what is attainable in most normal televisions you are used to.

The Wall Television is built to have some other features, prominent of which entails being energy efficient, dust resistant, ESD safe and water-resistant. All of these promises the user of the television a great performance be it for indoor or outdoor usage.